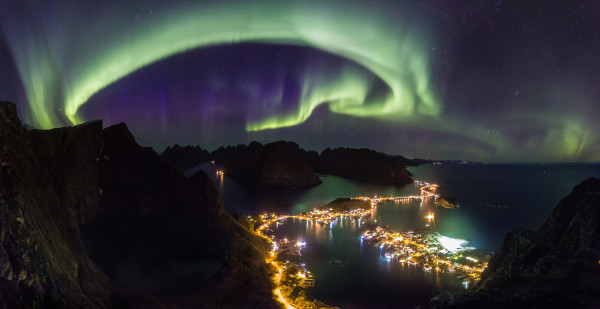 On 19 August 2020, at 14:19, baby Aurora Wolteck was born in Dettingen Konstanz on the border between Germany and Switzerland, completely unaware of the Arctic adventure that had unfolded nine months earlier.

But let us go back even further, to the day in 2009, when two young people, Nathalie and Benjamin, now 30 and 33 years old, were introduced to each other through a mutual friend while hiking near Lake Constance. It was friendship at first smile, and a few years later their friendship evolved into love. In December 2019, they exchanged vows and celebrated with a grand Christmas-themed wedding.

“We love everything to do with Christmas and decided to host a winter wedding. It’s our favorite time of year,” the couple says.

Shortly after their big day, the newly-weds left on their honeymoon. And while many dream of tropical nights and white, sandy beaches as the ultimate honeymoon destination, this outdoorsy couple, who love the crisp, cold winter air, had other plans.

They had always dreamed of seeing the northern lights and contacted a travel agency who recommended Iceland or Norway as potential destinations.

“So we went home and started googling,” Benjamin says. “On YouTube, we found several documentaries about Hurtigruten, including ‘Adventure Hurtigruten Winter Magic at the Arctic Circle’, and we were impressed by what we saw.”

The couple wasted no time and pounced on a good offer in connection with Hurtigruten’s 125th anniversary, securing tickets for an eleven-day cruise from Bergen to Kirkenes and back, and looking forward to a magical journey through beautiful coastal landscapes and the Arctic winter. The fact that their ship was “MS Nordlys”, which means Aurora, was a coincidence, but they took it as a promising sign of what they would experience on board.

“The weeks before our wedding had been extremely hectic,” Nathalie says. “so we were looking forward to some peace and quiet on the long cruise. But we were also looking forward to learn more about Norway, the culture and the people, and of course to enjoy the beautiful scenery.”

And they were not disappointed!

“We went on many excursions on shore,” Benjamin says. “The midnight concert in the Arctic Cathedral in Tromsø was a lovely experience, and we were also able to see the unique tidal current at Saltstraumen in Bodø. In Lofoten, we traded the ship for a bus for a few hours and were able to experience a lot of this beautiful archipelago. There was so much to see along the way. We actually loved everything on this trip,” Benjamin laughs.

But there is one thing that stands out as the highlight of this journey along the Norwegian coast: the Northern Lights!

“We have been interested in this phenomenon for so long, so naturally we hoped to be lucky enough to experience it,” Benjamin says.

“It was very romantic,” Nathalie adds. “At first, it was very faint before it grew stronger and stronger and danced across the sky. We were at a complete loss for words.”

“We saw it twice that night,” Benjamin continued. “After we had gone to bed, the ship’s Northern Lights alarm woke us. We had gone to bed fully dressed so we would be ready on short notice, and we ran outside!”

“And on the southbound journey, we saw it again in Svolvær. This time it lasted a really long time with many ‘ribbons’ across the sky. We stood staring up at the sky for at least an hour and we could not take our eyes off it. It was amazing,” Nathalie sighs.

Which brings us back to the beginning. Nine months after the honeymoon to the Arctic, little Aurora was born, named after the Aurora Borealis — this unique natural phenomenon of lights dancing across the sky north of the Atlantic Circle in winter.

It was the Italian physicist, astronomer and philosopher Galileo Galilei (1564–1642) who gave the Northern Lights their scientific name. He named them Aurora, after the goddess of dawn in Greco-Roman mythology, and Borealis after the Greek god of the north wind, Boreas. His theory of what causes the Northern Lights was wrong, however.

In 1895, Norwegian scientist Kristian Birkeland published a theory about the Northern Lights that proved more accurate. Today, we know that the phenomenon is caused by electrically charged particles from the sun, called solar winds, hitting the magnetic field around the earth. These particles flow toward the earth’s magnetic poles, and when the solar wind collides with the earth’s atmosphere, we get Northern Lights.

The Northern Lights shine most often and most strongly for a couple of hours around midnight. And while the aurora dances across the sky year-round, the sky must be dark and the weather clear for us to experience it, as any cloud cover would sit just a few thousand metres above the ground, between us and the dancing light.

The Northern Lights can be observed from late August through early April anywhere within a circle of approx. 2500 kilometres from the magnetic North Pole, which in Norway would be from Helgeland and anywhere further north.

If Nathalie and Benjamin had hoped for a Northern Lights baby before they travelled north, we can not be certain of, but ancient folklore ascribes powerful magic powers to the aurora. Many of them are related to children and childbirth. Some believe that a child conceived under the Northern Lights will be exceptionally beautiful. Some Asian cultures strongly believe the aurora will grant their wish to have a boy.

Nathalie and Benjamin were delighted to welcome their beautiful daughter Aurora into this world. And when she gets old enough to understand how things are connected, her parents plan to take her to see the Northern Lights and explain to her how she got her name.

“Our honeymoon was our first visit to Norway, but definitely not our last,” the Woltecks say. They also recommend Hurtigruten to other honeymooning couples.

“For us, this eleven-day journey was the perfect mix of relaxation, time to ourselves and adventure. We got to see and experience so many things, while also having plenty of time to just enjoy each other. The crew on board also worked hard to ensure that we and the other passengers had a perfect trip. Experiencing Norway’s winter season was the best decision we could have made. Our best friends have now decided to take their honeymoon in Norway too, as soon it is possible to travel again. Many of our family and friends were sceptical of our unconventional choice in the beginning, but they were quickly won over.”

Norway is the place to experience the magical northern lights and the midnight sun above the Arctic Circle; visit the world-famous fjords surrounded by spectacular mountains and glaciers; and in the midst of stunning scenery, enjoy gourmet food and culture in the cities of Oslo, Trondheim, Stavanger, Bergen and Tromsø.