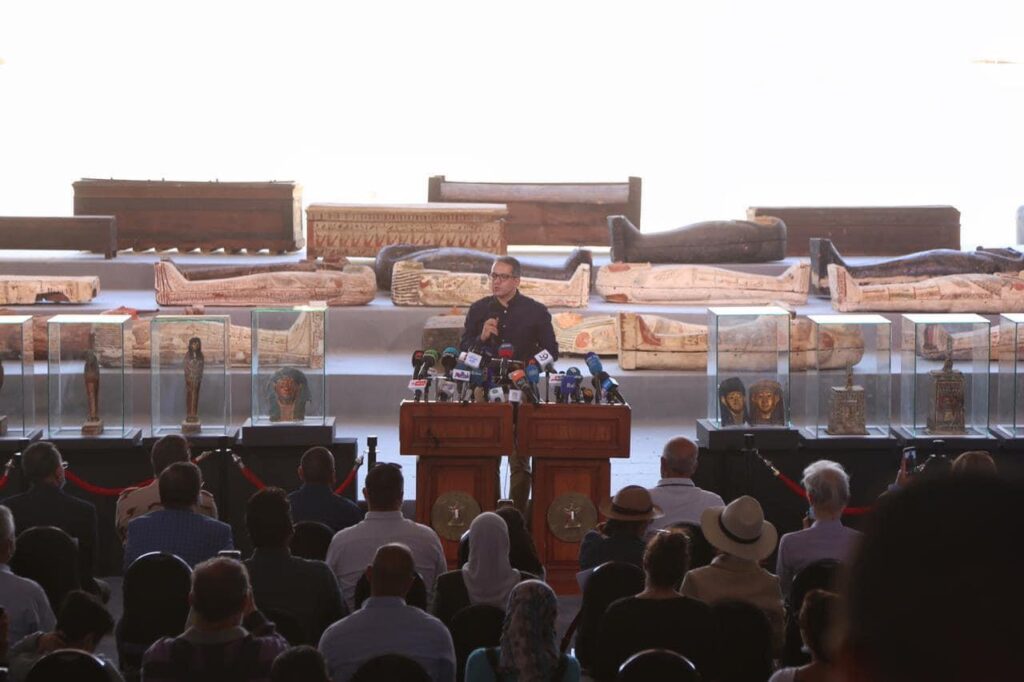 A new archaeological discovery in Saqqara was announced on 14th November. The Egyptian archaeological mission working there uncovered 100 sealed wooden coffins in their initial condition and 40 statues of the deity, Ptah Soker, God of the Saqqara Necropolis, including gilded statues and 20 wooden boxes of the god Horus, and two statues of “Phnomus”, one of them is 120 cm high, and the other is 75 cm high made of acacia wood. In addition to the unveiling of a number of Ushabti statuettes and amulets, and 4 Golden masks of gilded cartonnage.

The announcement was attended by Major General Ahmed Rashid, Governor of Giza, Ambassador Badr Abdel Aty, Assistant Minister of Foreign Affairs for European Affairs, Dr. Mostafa Waziry, Secretary General of the Supreme Council of Antiquities, Major General Atef Moftah, Supervisor of the Grand Egyptian Museum and the surrounding area, and Dr. Ahmed Ghoneim, CEO of the National Museum of Civilization. Dr. Al-Tayeb Abbas, Assistant minister for archaeological affairs at the Grand Egyptian Museum, and a number of ministry officials, in addition to some Egyptian public figures and artists.

About 36 foreign, Arab and African ambassadors in Cairo and their spouses, as well as a large number of local and international news agencies, newspapers and television channels attended.

Dr. Khaled El Enany, Minister of Tourism and Antiquities, began his speech by welcoming the guests, saying that this is the third year in a row where an archaeological discovery was announced in Saqqara.

The Minister also talked about Saqqara, explaining that it is one of the most important sites of the Memphis necropolis , which is the first capital of Egypt. It extends from Abu Rawash in the north to Dahshur in the south, pointing out that the Necropolis of Memphis is one of UNESCO’s World Heritage sites in Egypt.

He added that Saqqara is a very large area with around 13 pyramids. Kings, high rank citizens and senior officials were buried there from the ancient era, alongside their families through most eras of ancient Egyptian history (Pharaonic, Greek and Roman). Saqqara also has a number of ancient monasteries and the largest animal necropolises.

He said that Saqqara is a very rich area that is still full of mysteries that is revealed to the world every now and then. Emphasizing that it is expected with, continued excavations, to find more human and animal tombs.

The minister explained that this new discovery was found at the same place as the previous discoveries, pointing out that today is a continuation of the last discovery that was announced last October, indicating that today is not the end of the discovery and that more will be revealed and announced soon.

In response to questions about waiting to announce the whole discovery when it is completed, the minister explained that the coffins have to be extracted from the shafts where they were discovered to make room to continue the exploration of the new shafts behind them.

The minister explained that the coffins announced today will be distributed to the Grand Egyptian Museum, the National Museum of Egyptian Civilization, the Egyptian Museum of Tahrir, and the Museum of the New Administrative Capital.

The minister explained that all the archaeological discoveries that were announced during the last period are nothing but a blessing from God; in addition to giving Egyptian archaeologists the opportunity to work on excavations. He expressed his happiness in the ongoing partnership with archaeologists, from all around the world in excavations, for decades.

He said that this discovery will not be the last in 2020, pointing out that Dr. Zahi Hawass had informed him a few days ago of a new archaeological discovery in the Saqqara. He added that it will take a few weeks to announce it, by the end of December or the beginning of 2021.

He pointed out that the year 2020 will not end before the opening of the Central and the Mummies galleries in the National Museum of Egyptian Civilization. He said that this will be accompanied by a grand parade to transport royal mummies from the Egyptian Museum in Tahrir.

The minister emphasized that the tourism and antiquities sector enjoys unprecedented support from the political leadership, as His Excellency the President inaugurated three archaeological museums in three governorates in one minute late October.

The minister concluded his speech by offering his sincere thanks to all his colleagues working at the Ministry of Tourism and Antiquities, and the Supreme Council of Antiquities headed by Dr. Mostafa Waziry, Secretary-General of the Supreme Council of Antiquities, for this archaeological discovery, especially for their work in difficult circumstances, and a special thanks was also due to archaeologists, restorers, and others.  He also thanked the National Bank of Egypt for sponsoring this event.

Dr. Mostafa Waziry, Secretary General of the Supreme Council of Antiquities, explained that the X- ray of the mummy showed that it was of a male, who was in good health during his life and that he probably died between the age of 40 and 45 years and that his height ranged between 165 and 175 cm.

Mr. Hisham Okasha, Chairman of the Board of Directors of the National Bank of Egypt, expressed his pride in the continuation of the strategic partnership with the Ministry of Tourism and Antiquities. He also said they are glad to participate in these successive archaeological discoveries, as the bank previously sponsored the announcement of the discovery that took place last month in the heart of the Saqqara. The previous discovery had a positive impact. He said that this partnership reflects the bank’s role in supporting the scientific and cultural sectors in Egypt. Especially supporting Egyptian monuments that document human history. He added that the National Bank of Egypt does not spare any of its material, human or artistic capabilities in supporting the Egyptian culture, especially those that positively affect the tourism industry in Egypt which is an important industry that affects the national economy and the lives of thousands of its workers.

Nermin Shihab El-Din, Head of Marketing and Community Development at the National Bank of Egypt, indicated that the bank’s role has sponsored projects to develop some sites and monuments in cooperation with the Ministry of Tourism and Antiquities in both the Giza plateau, Karnak temple in Luxor, Philae Temple in Aswan and Abu Simbel temple. In an effort by the bank to maintain the position that these most famous landmarks deserve in the world, which reflects the bank’s belief in the importance of implementing sustainable development and comes within the framework of its social responsibility.

It is worth noting that the area in which this discovery was found is the “tomb of noblemen” in Saqqara, in which the sacred necropolis of cats, animals and birds was found. This is in addition to the great discovery of the tomb of “Wahty”, a priest of the Republic Fifth Dynasty, which was praised by the whole world.