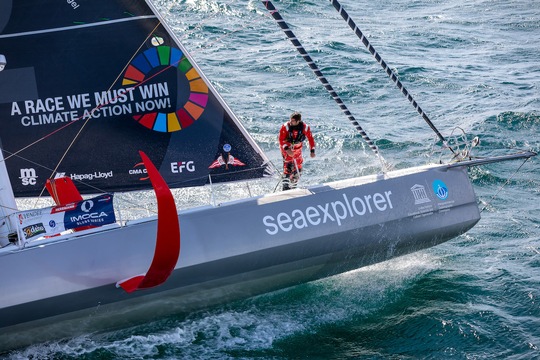 Boris Herrmann is Germany’s best-known sailing athlete and one of 33 skippers who set off sailing 45,000 kilometers non-stop around the globe in the Vendée Globe, the world’s toughest single-handed sailing race. Herrmann has also been involved in environmental and marine protection for years. At the beginning of 2020, he initiated and launched a mangrove reforestation project in the Philippines called Malizia Mangrove Park as a climate protection measure. The goal is to plant 1 million mangroves during the Vendée Globe Race and thereafter at https://maliziamangrovepark.de.

This year, Boris Herrmann started a mangrove reforestation project in the Philippines together with the German-Philippine environmental organization Mama Earth Foundation. Under the name of his racing team “Malizia”, the mangrove forest in the Malizia Mangrove Park on the southern coast of Mindanao in the Philippines is being reforested. Mangrove forests grow along tropical and subtropical coasts and, along with tropical rainforests, are among the most species-rich and adaptable ecosystems on earth. But their existence is endangered. Over the last 40 years, about one third of the world’s mangrove stocks have been destroyed.

Why mangroves? Mangroves are enormously important for reducing CO2 in the atmosphere. Mangrove forests absorb at least as much CO2 per unit area as tropical rainforests – some studies even speak of many times the amount of a forest of the same size on land. In addition, mangroves, which can grow in fresh or saltwater, form a strong natural barrier against erosion and provide food and income for over 120 million coastal inhabitants worldwide. Only in recent years has the understanding spread that this ecosystem is enormously important and worth protecting. In the meantime, their importance as a means to fight against climate change has been recognised and they are often placed under nature conservation.

Reforestation projects such as the Malizia Mangrove Park initiated by Boris Herrmann help to rebuild the population. By mid-December, donations for more than 175,000 mangroves have already been collected, 144,000 mangroves have already been planted, and another 60,000 seedlings are currently being grown in nurseries. The Davao Oriental State College of Science and Technology is monitoring and documenting the planting.

The average CO2 emissions per capita in Germany are up to 12 tons per year. In the literature, the values for CO2 sequestration per mangrove and year vary greatly, depending on the measuring method, location and type of mangrove. The range goes from low single-digit values to 15 and more kg/mangrove/year. To be on the safe side, we calculate with an extremely conservative value of 2 kg/mangrove/year over a period of 20 years at Malizia Mangrove Park. This means that 100 mangroves will bind about 4 tons of CO2 in 20 years and 300 mangroves will bind about 12 tons of CO2 in the same period. To compensate your annual carbon footprint over the next 20 years, you should plant at least 300 mangroves every year. Info: https://www.maliziamangrovepark.de.